The Okonski’s descendants of Macij (Mathias Okonski), Gen 3 (see below) migrated to United States from Prussia-Poland in 1873 through Netherlands. Macij, his wife Marianna Nyka Okonski and Joseph their 20 month old son, arrived at Ellis Island in New York City on vessel, Cambria, on October 4, 1873. They migrated to Pennsylvania where they resided for 7 years to work and save enough money to buy tickets on a vessel to Galveston and then by wagon train to Bremond, Texas in 1880.

Detail information and many pictures for this Okonski Family short story below and for additional information such as various Family Stories, Family Tree, Favorite Recipes, Good Ole Jokes and many other related Okonski activities over the past 120 years are located on the “OkonskiFamily.com” website. The Okonski Family Tree is maintained by Mark Okonski and OkonskiFamily.com website is maintained by Gene Okonski with their contact information for both on the website. More research is required especially in Poland for Gen 1 and Gen 2 below to determine the Okonski relatives prior to 1750 and where (if any) of Macij 7 brothers and 2 sisters migrated to Unite States or any other Countries.   Any assistance for many of the Family Stores including some old pictures for Gen 3 and Gen 4 below would be most appreciated. 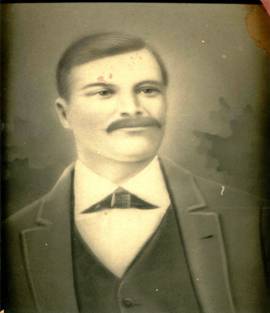 Macij, his wife Marianna, and son, Joseph, settled on Tidwell Prairie in Bremond, Texas. Macij and Marianna had 7 children (see Gen 3 below). Marianna died October 15, 1892. Macij married Michalina (Annie) Jerzek Fojut and had 4 stepchildren for a total of eleven children. 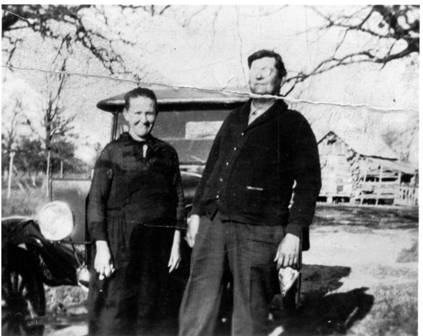 Joseph and Victoria Okonski on Nov 29, 1929 at “Okonski Homeplace”

Besides farming and ranching, Joseph harvested wood and utilized an old timey sawmill to cut logs for barns, wood for lumber, and wood for burning in wood and cook stoves. He also had several horse teams with various horse- drawn equipment and cut hay, planted and plowed cornfields and cotton fields for hire. He grew tobacco, large gardens and raised various livestock and poultry for sale. Joseph also worked on roads and bridges. Joseph took a team of horses and wagon to Galveston in 1901 from Bremond for a whole year to construct the Galveston Seawall after all the destruction and more than 5,000 people that died in the hurricane that hit Galveston in 1900.

The first picture taken on the steps and side porch of the “Okonski Homeplace” house was in 1921. 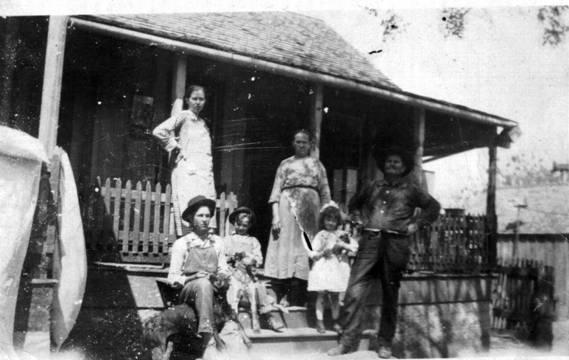 Joseph and Victoria Szturemski Okonski, sons, Edward and Marion Okonski ,and daughters, Theresa Okonski Wilganowski and Pauline Okonski Mushinski are standing or sitting on the steps of the “Okonski Homeplace”. The large porch, columns , windows, and doors and the location of the steps are currently the same in 2012 as in 1892 and 1921 when above picture taken.   House, corn crib, and other smaller buildings were built in 1880’s. 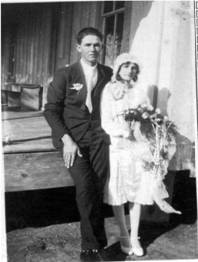 They stayed in the “Okonski Homeplace” while Ed’s parents, Joseph and Victoria and their remaining children at home, moved 1 mile closer to town on Tidwell Prairie. Ed and Helen began raising their family with seven children born in the “Okonski Homeplace”.   Electricity was finally brought to the “Okonski Homeplace “ in 1949 with only five lights and two additional plugs for appliances. Ed and Helen could only afford the radio for the first year and lights were seldom on and never after 9:00 pm. Gene remembers having to turn the kerosene lamp on and lights off at 9:00 pm even into the early 1960’s to complete his high school homework. 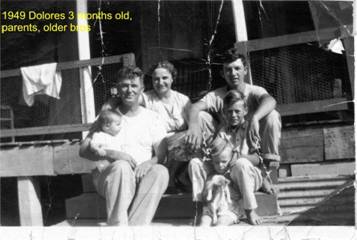 The refrigerator came in 1951 which reduced all that additional canning of sausage links and patties to store for future meals. A visit twice a month to the locker plant in Hearne, Texas was always on schedule to bring some beef back and some chicken or fish taken. Growing and selling from a one acre tomato patch, a very large garden, various type of poultry, an occasional calf or hog, and other items such as geese feathers, eggs, watermelon and various fruit were the primary source of income for the family. Additional income came from working for other people for such things as chopping corn and cotton, harvesting corn and cotton and many odd jobs utilizing horses, mules and horse drawn equipment.   Edward, oldest son, remembers driving to Bremond’s tomato plant with 21 bushels of tomatoes on a Model A Ford with all seats out and replaced with bushels of tomatoes and coming back with 22 bushels of tomatoes and a $1.00 check. Since Ed just graduated from high school, Dad realized that it was time to send him to Houston to get a job and send some money back on a monthly basis to help keep the family going and ensuring the remaining children received a high school education. A propane gas stove replaced the cooking wood stove in early 1950’s and a water pump was finally hooked up in late 1950’s. 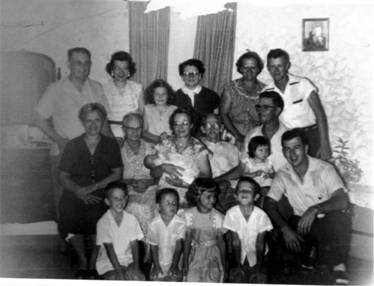 All seven children were able to graduate from Bremond High School, find good jobs, raise their own families and help support their parents throughout their remaining years .  Many of the Okonski’s continued to visit or spend some of their vacation time from Chicago, Houston and many other cities and states in the Union. They enjoyed all the fresh vegetables, homemade bread, fresh chicken/beef and homemade pies or cakes, riding the horse drawn wagon, hayrides with tractor, fishing, swimming in the pond, making homemade ice cream, and visiting/sleeping on the porches. 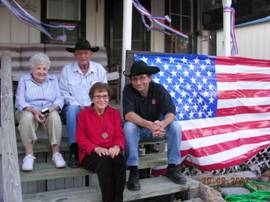 Many of the other Okonski’s moved to Houston or Chicago to find jobs and continue to raise their families especially after many went through two World Wars, the Depression, and the continued difficult life trying to make a fair living farming their land in Bremond, Texas.

Ed and Helen celebrated their 50th wedding anniversary with their picture and seven children taken in November 1979 at the “Okonski HomePlace”.

Ed and Helen moved from the “Okonski HomePlace” on Ed’s 80th birthday or August 8, 1986 to a house on N Main St in Bremond, Tx.

Gene Okonski (Gen 6 below), the 3rd son of Edward and Helen Okonski purchased the remaining 1 acre of Okonski Farms and “Okonski HomePlace” house in 1986. 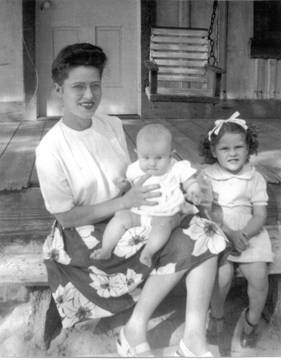 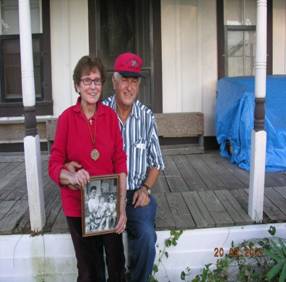 Gene’s son Kevin (Gen 7) and wife and grand-children Tyler and Anthony Ryan (Gen 8) have/had frequent visits to the “Okonski HomePlace” assisting with the various operating tasks and many social events including several Catholic Masses and many Family Reunions . 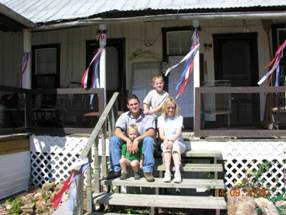 Edward Okonski, oldest son of Edward and Helen, and wife Janie already have great grand- children that have started the next generation (Gen 9) who have also visited the “Okonski Homeplace”. Seven of the nine Generations of Okonski have been at the “Okonski Homeplace “ house. Farming and ranching were the primary operations of the Okonski Farms for the past 120 or more years. The house, old corn crib, chicken house and a couple other buildings have also survived the last 120 years.   Anytime a storm was nearby, Mom and Dad’s Mom, would light candles and made a sign of the cross on the windows which probably protected the house during all these years.

The Poland/Bremond Okonskis’ are related to many of the Polish Families from Bremond, Texas and are located in many cities in Texas and many states in United States.

Macij, his wife, and son, Edward and Helen and many immediate family relatives are buried in St Mary’s Cemetary in Bremond, Texas.

Rosali (2nd child) was born Sept 3, 1828 in Slabomierz, Prussia-Poland and married Joseph Michalski on May 29, 1849 in Gorzyce, Prussia-Poland. Joseph was son of Mihael Michalski and Marianna Szlotoski.

Macij (Mathias) (10th child) was born on Feb 23, 1844 in Slabomierz, Prussia-Poland. He married Marianna Nyka on May 25, 1869 in Znin, Prussia-Poland. Marianna was born on Jan 29, 1850 in Skarbience, Prussia-Poland. She was daughter of Joseph Nyka and Barbara Cieslak. Marianna, Macij and their 1stth son Joseph at age 20 months took passage on the vessel "Cambria" and landed at Ellis Island in New York City on Oct 4, 1873.

Gen 4 – Joseph Okonski – Macij and Marianna’s( 1st child) was Joseph Okonski born March 15, 1871 in Prussia-20 months old when he and his parents took a several week ocean boat ride on vessel “Cambria” from Prussia-Poland to the Netherlands and then to Ellis Island in New York City arriving on October 4, 1873, They continued their trip to Pennsylvania and had to work for seven years to save enough money to take a vessel trip to Galveston in 1980 and by wagon train to Bremond, Texas. Joseph married Victoria Szturemski on November 16, 1892 in Bremond, Texas.

Gen 6 – Children’s names are listed below their Gen 5 parents. 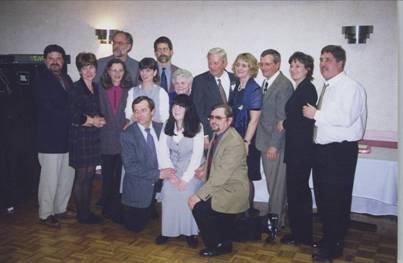 Sadie Okonski (5th child) was born Jan 29, 1918. She married John Stachniak who was born Jan 1, 1914 and died Oct 22, 1990. Sadie married Gordon Campbell Jul 30, 1994. Sadie also made frequent trips back to the “Okonski Homeplace” and also visited where she, Harry and brothers and sisters were born on Tidwell Prarie.

Steve Okonski (1st child) was born Aug 29, 1916. Married Josephine Nobra. Died Oct 14, 2000. Lived all their lives on Tidwell Prairie. Steve played the fiddle for over 70 years in many cities in Texas for many weddings, reunions, and social functions and is known for some favorite polka and waltz music.

Steve and Josephine had 7 children.

We are also trying to determine any relations to Zbigniew Okonski, Defense Minister of Poland, who negotiated purchase of F16’s with President George H Bush during President Clinton,s term in 1995 and wrote Partnership for Peace: An Essential Element of the European Security System. We also are trying to determine any relations with Walter Okonski, who is the famous author Of Poland’s World War II book. Detail information for Gen 7 and Gen 9 are minimized for security reasons. Again, see the OkonskiFamily.com website for more detail and future updates.